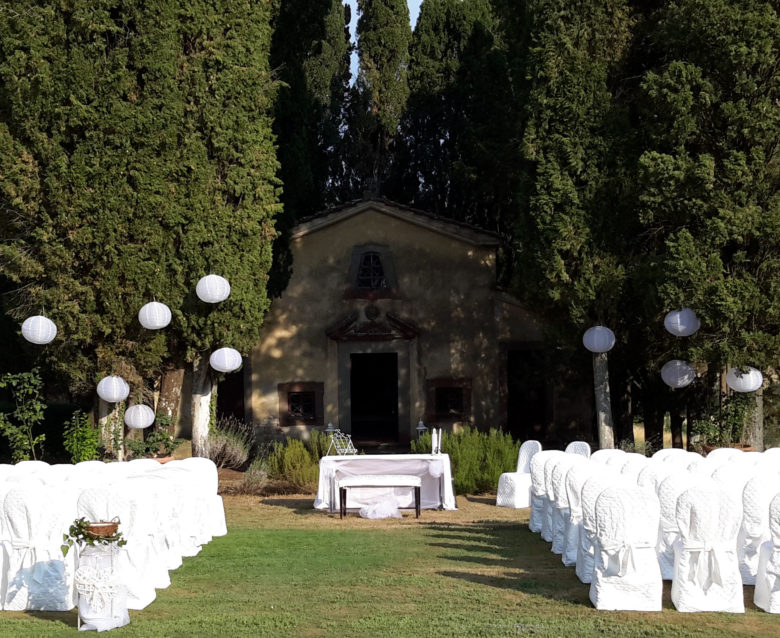 Originally, it was decided to set up a complete outdoors-themed wedding, but now, with the risk of rain? What were we going to do: keep everything outside or transfer the whole venue inside of the Villa? The weather seemed to turn bad while the guests were nearly to arrive and we were still deciding what to do. Time passed inexorably. The sky was still dark gray but it wasn’t raining. With a touch of madness that sets us apart and fingers crossed and with the approval of the pair, it was decided to keep everything unchanged except for the buffet that was then prepared, at the very last minute, in three different beautiful rooms of the villa.

In the meantime, the bride and bridesmaids all got their hair and make up done together in the master suite of the villa. It was a nice feminine bonding moment before the main festivities got under way. An added benefit is that the master suite had a birds eye view of the property in many directions and so the bride could watch all the set-ups and decoration taking form throughout the day. The groom and the best men gathered together in another room to get dressed. That room was facing the garden where the ceremony was going to take place. Love was all around!

On the wedding day, the couple wanted everything colorful but with white accents and occasional greens for the ceremony. The design inspiration was to be very formal, elegant and lush in a rural contest.
Angela was wearing a really soft and delicate dress and simply perfect for her and completed her elegant bridal look with simple earrings and exited down the aisle, with her uncle, to “Bach – Air Suite No. 3” played live by Arianna at the violin and Eleonora at the Guitar.
Cristiano Facibeni photographed the event and Rosy was of course the creative mastermind behind the decor and the organization of the venue.

Both Pastor Steve and Pastor Suss, Protestant Ministers, performed the ceremony on the garden facing the little chapel of the Renaissance Villa with a grand view over the countryside. The bride and the groom wanted the ceremony area just simple but all white. For their alfresco ceremony, bride Angela asked Rosy to suspend some rice paper lanterns from the threes surrounding the chapel to create an eye-catching elegant-meets-modern display – especially at night when the lanterns got lighted – and under which the pair exchanged their vows.
At sunset, during the cocktail hour, the villa and its gardens were bathing in a pink light that created a whimsical, fairly tale atmosphere.
In addition the buffet dinner was hearty and sumptuous as well as the wine from the surrounding Tuscan countryside which are among the world’s best.

Under the Lebanon cedar tree, the wedding cake has been realized by two phenomenons Maestri Pasticceri in front of the couple and for the joy of their guests.
The cake assumed the form of two hearts joined together for life: a delicious elegant and traditional half pure white millefoglie cake combined with a second half Summer inspired pie with seasonal fruits.
The ceremonial cutting of the wedding cake symbolized the first task the newlyweds executed together.
Lebanon cedar tree, silk, crystals, silver, candles, colorful flowers compositions, great African songs and dances and two people in love: not one thing wrong with that combination!
The ultimate wedding DJ kept everyone dancing nonstop outside and, at the end of the evening, guests bid the couple goodbye via a pathway of candles – the perfect finale to a magical evening.

It was a first class wedding in every respect with no details overlooked. It was the culmination of a day that the couple and everyone in attendance will never forget.

« ON THE TRACK OF FLORENCE IN THE MIDDLE-AGE WITH ITS ARTISANS, BLACKSMITHS AND TRADITIONAL FLORENTINE CUISINE
TUSCANY IN WINTER? YOUR UNIQUE FIVE-SENSE EXPERIENCE »